Español
On a grey day with begging-to-be-photographed trees waving a Winter-coloured welcome, I was part of a media group that found the conditions just perfect for sampling delicious wintery food at Kleine Zalze’s Terroir. But the day was about more than food, as the estate’s wines have just taken top honours for the second consecutive year as best New World Producer at the UK’s Sommelier Wine Awards.

Anthony van Schalkwyk, marketing manager at Kleine Zalze, set the scene for the day when he welcomed us (and the rain), as there have been a few fires in the area recently.

He said the Kleine Zalze team has done a getting through the challenges as they haven’t lost any of their huge harvests of 2017 and 2018 wines, with “just a few days without MCC.”

Frequent diners and imbibers had noticed a few vines removed near the entry, but this is nothing to worry about – it’s part of a replanting programme. With better vines on offer now, Van Schalkwyk says they’d rather replant sooner than later.

He’s excited about the industry, and the quality of wines South Africa is producing in general at the moment, as it’s so much more refined than it was a decade ago and means they can keep their main focus on producing quality wines.

This was evidenced in their recent re-award as Best New World Producer by the UK Sommerlier’s Wine Awards, where they also garnered seven medals in total, five of which were gold, and awarded for five different varietals – Cabernet sauvignon, Shiraz, Chenin blanc, Sauvignon blanc and Chardonnay.

We say we produce wines people can enjoy, but you can also enjoy our wines with food.

This was the challenge we accepted as the food started coming in, as Van Schalkwyk said true excellence comes from consistency over the range, in making wines people can enjoy and trust irrespective of the varietal.

Any business journey is evolving so you can’t get complacent, especially as a wine business. Van Schalwyk said even classic brands are realising the need to make little changes and tweaks or else you don’t know where you’ll end up, so take note of industry trends and adopt what makes sense – do so for the generation that will take over.

Chenin blanc and the nuances of new wine drinkers

With this is mind, Van Schalkwyk explained how “Kleine Zalze’s mind” works in approaching the challenges of vintage in a constantly changing market and scope. Like everything, he pointed out that new wine drinkers start at a certain point and evolve their taste from there.

Chenin blanc is an example of this mindset in action, with Van Schalkwyk pointing out that quality-wide, SA’s Chein blanc is up there, but we’re a small player in the global context, so ‘bold’ is often an entry point.

But Van Schalwyk says as an industry, we don’t need to make the statement wines that knock you between the eyes. Be comfortable in the styles you want to produce, without a complete change in identity. That’s how Kleine Zalze is differentiating itself in the elegant modern world.

As such, the afternoon wasn’t a pairing as much as a showcase, where we sampled a selection of experimental wines to decide on the ones that best matched our individual tastes.

These ranged from the skin-fermented, salty Chenin blanc to one fermented in terracotta, echoing the Egyptian technique or fermenting in amphora and following a natural fermentation process, and more well-matured glasses with the apricot minerality you’d expect.

Van Schalkwyk added that no matter how much pressure they face to make more, the only thing they’ll never compromise on is quality – no worries about stretching or diluting the blend here.

That’s why Kleine Zalze is celebrating its second straight win as best New World Producer – this is the estate’s third win, after initially claiming the title in 2015. No other entrant to the multinational Sommelier Wine Awards (SWA) in the UK has done so before.

As managing director of Kleine Zalze over the last 15 years, Kobus Basson and his family have evolved the wine estate into the most awarded in Stellenbosch; marrying agricultural knowledge and business acumen to produce successful results…

SWA is the only competition aimed solely at the on-trade, rewarding the best wines available to restaurants, bars and hotels in the UK and beyond with all wines tasted blind and by category on criteria like food-friendliness, versatility, personality and value for money at whatever the price.

Putting their steak stake in Shiraz

We could actually taste their success.

Having sampled the Chenin blancs with moreish starter platters of bread and dips that were waiting on the tables in chef Michael Broughton’s gourmet restaurant Terroir at Kleine Zalze, it was time for the three-course set menu as we supped the last few sips.

Now in its 12th year of operation, Terroir continues to dazzle among Stellenbosch’s cluster of culinary stars, with chef Michael Broughton at the helm…

First up was roast and stuffed chicken breast with langoustine, peas and asparagus in a rich, creamy rich sauce that lent itself especially well to the glass options two and four (that’s my opinion).

Next up, just what the fireplace called for – Shiraz four ways, with flame-grilled Picanha steak, as well as Porcini bean ragout, served with bright pops of green and tangy, earthy BBQ and pepper sauce.

Shiraz is a bit of a regional sleeper for Stellenbosch, which is known for its Cab sauvignon, but this highlights Kleine Zalze’s story of evolution and the early days of putting their stake in the ground as a new world producer, as the bottles in their cellar prove the estate is known for its Shiraz, though they didn’t want to the intensity and boldness of flavour to be lost as the consumer’s palate changed for something fresher.

“Cabernet Sauvignon is the yardstick by which all wine regions are judged, and over the years Stellenbosch has proven to be the most successful area in South Africa for producing great Cabernet.”

To illustrate this, we tasted the 100% whole-bunch ferment Shiraz, which is more elegant than the norm, with a pinky-white pepper freshness rather than the signature black peppercorn.

We noted a distinct style change from wines two to three, with that dark, rich intensity and leathery earthiness evolving with a bold, new-world style and fresh vibrancy in a more subtle expression of Shiraz.

More than anything, this is the true taste of Kleine Zalze’s evolution from big, bold statement wines to those geared to the new consumer’s palate, without changing the original bouquet they’re known for.

The best part? While the wines definitely stand alone, these are also excellent food wines and not just for drinking. 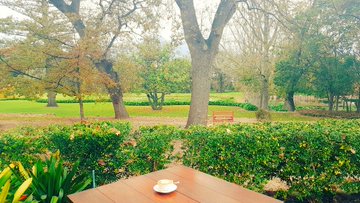 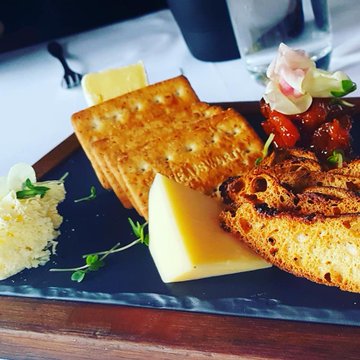 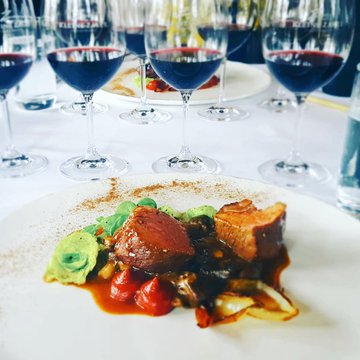 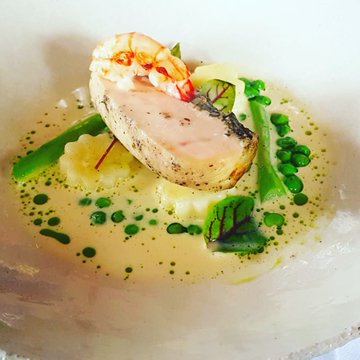 In case you thought it was just about the wine… Lunch, presented in reverse order. Delicious, thanks @manleycom @michaelterroir at #KleineZalze in @StellWineRoute! All the words on @Bizcommunity soon…

For dessert, the tables were adorned with platters of tiny flower-decked and chocolate-filled Chou petit fours and soft cheeses, preserves and crackers, just perfect to end the afternoon with a taste of the Kleine Zalze dessert wine and followed by a hot cappuccino.

All in all, a perfect Winter’s afternoon that was all the more Refreshing in that we were provided with the context and stories and left to draw your own conclusions.