A lady selling tomatoes and other vegetables at a market stall/Source: CW

While Kenya is having some success fighting desert locust swarms, farmers in the north and center of the country face huge losses from ongoing waves of locust swarms.

Some crops are growing scarce in Kenya due to the ongoing locust plague Seventy-year-old Isabella Karoki has never witnessed such a devastating invasion of desert locusts.

“I have lost everything. What do you expect me to eat?” said Karoki, who lives in central Kenya, an agricultural region known for its rich volcanic soils and moderate rainfall.Farmers like Karoki usually see the rains as a blessing, but as well as being beneficial to crops, the rains also allow locusts to reproduce quickly.

In 2018, an intense cyclone season unleashed rain in the immense sandy desert on the southern Arabian Peninsula. The moist sand and sprouting vegetation provided favorable conditions for the locusts to thrive, with massive swarms spreading to Yemen, Saudi Arabia and Iran.

Carried by the wind across the Red Sea,the locusts made landfall on the Horn of Africa in mid-2019 amid perfect conditions for their reproduction: it was one of the wettest years in decades with eight cyclones off East Africa’s coast.

The insects started swarming into Kenya in December 2019, triggering the worst locust outbreak the country has experienced in 70 years.

Various parts of Kenya were then hit by a second wave of the voracious insects last November. 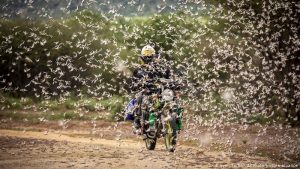 A Kenyan motocyclist rides through a cloud os locusts The sheer scale of the locust plague makes complete eradication difficult.

Locust threat not over yet Now

A new generation of pests is breeding and hatching, threatening farmers who are still reeling from the previous swarms as well as years of droughts and floods.

“We expect the worst if the young hatch in March and April,” said Kelvin Shingles, Kenya Country Director for German Agro Action (Deutsche Welthungerhilfe), an aid organization, in a press release.

Livestock farmers, who now lack feed for their stock, are particularly hard hit, according to the organization. Without feed for their livestock, they lack “vital income from sales of milk and meat.” Dairy farmer Thomas Mwerore is among them.

“The locusts have eaten all the pasture that was there for our livestock,” the 62-year-old told DW. “We are suffering. Even food that we humans eat isn’t there, what can we do?” 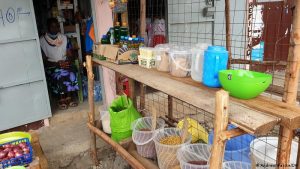 Some food staples are getting scarce

Plastic buckets filled with legumes and grains in wooden shelves in a small shop Some food staples are getting scarce Eradicating locusts takes time Kenyan authorities have sprayed pesticides on thousands of hectares of land but it’s difficult to get rid of the locusts from one day to the next.

“It’s not like a fire that you can put out quickly in a couple of days,” said Keith Cressman, senior locust forecaster at the United Nations Food and Agriculture Organization (FAO). “It takes months and months, perhaps even years, to bring it under control.”

International organizations have been delivering emergency aid to those in need, although the distribution of food, seeds and fodder has been hampered by the COVID-19 pandemic and the flooding that followed intense rainfall in some areas.

But for Celia Breuer, a program coordinator for Kenya at German Agro Action, aid organizations need to “look beyond immediate relief” and create some sort of early response so that communities are prepared to fight future invasions — whether of locusts or of other pests.

Link between locusts and climate change not clear

It is too early to ascertain if there is a direct correlation between climate change and the magnitude of the current locust invasion, FAO’s Cressman said.”If we just look at the last six or seven years, we see an increase in the number of the cyclones in the western Indian Ocean. But six years is very short. This could just be a temporary anomaly in the weather patterns,” he told DW.

The weather alone also isn’t responsible for locusts spreading in some places and not in others, Cressman added. Some regions, such as southern Somalia, Darfur in Sudan, and northern Mali have become important locust breeding areas because insecurity makes them difficult to access, he pointed out, not necessarily because of the weather.

Light at the end of the tunnel?

Looking at what has been achieved so far in combating the locusts, expert Cressman is optimistic. “This month we’re seeing the first signs of … light at the end of the tunnel with very positive improvements in terms of declining locust infestations,” he said, adding that this could soon help relieve a tense food situation. Celia Breuer from German Agro Action is less sanguine.

“Because locusts have declined in numbers that doesn’t necessarily mean that we’re out of the woods,” said Breuer. “We’re seeing mostly immature swarms in Kenya. They’re not yet laying eggs. They’re not yet reproducing. They haven’t increased the numbers yet.”That could change if it rains. That’s the same that rain farmers and pastoralists are counting on to grow their crops and livestock feed in the coming months.

Andrew Wasike in Kenya contributed to this article.