In the past few weeks demonstrators have taken to the streets of Khartoum and Omdurman to protest Sudanese President Omar al-Bashir’s removal of subsidies that have long kept bread and fuel affordable.

Now it’s Zimbabwe’s turn. Just before flying off to Russia last weekend, President Emmerson Mnangagwa doubled the price of petrol. Doing so brought already impoverished urban Zimbabweans out onto the streets of the capital Harare as well as Bulawayo and a dozen other cities and towns. Protesters blocked roads with tyres, trees and rocks, stopped bus transport, attacked the police, threw canisters of tear gas back at security forces and generally ran amok.

At least five people were reported to have been killed. Flights into Harare were cancelled and the government closed down the internet.

Mnangagwa’s excuse for raising prices so abruptly is not clear. Possibly he thinks that more costly petrol will bring more cash into national coffers that are mostly bare. Or perhaps he believes that more petrol will pour into the country via the pipeline from Beira in Mozambique if it is more valuable. Both ideas are barmy.

Before flying off to Russia, Mnangagwa said that the fuel price rise was intended to reduce shortages of fuel that, he indicated, were caused by rises in the use of fuel and what he called “rampant” illegal trading – accusations that make no sense whatsoever. Making petrol purchasing more expensive for poor Zimbabweans – the majority of the nation’s people – simply adds to their hardship and further slows an already crippled economy.

Instead Mnangagwa should do everything his government can to reduce the shortage of real (rather than fake) cash that is crippling the local economy, reducing local production and corporate and consumer cash flows, and driving an already weakened economy further into recession.

He should also be focused on taking a number of other bold steps to try and reverse the collapse of the country’s economy. Among them are bringing state looting to a halt. 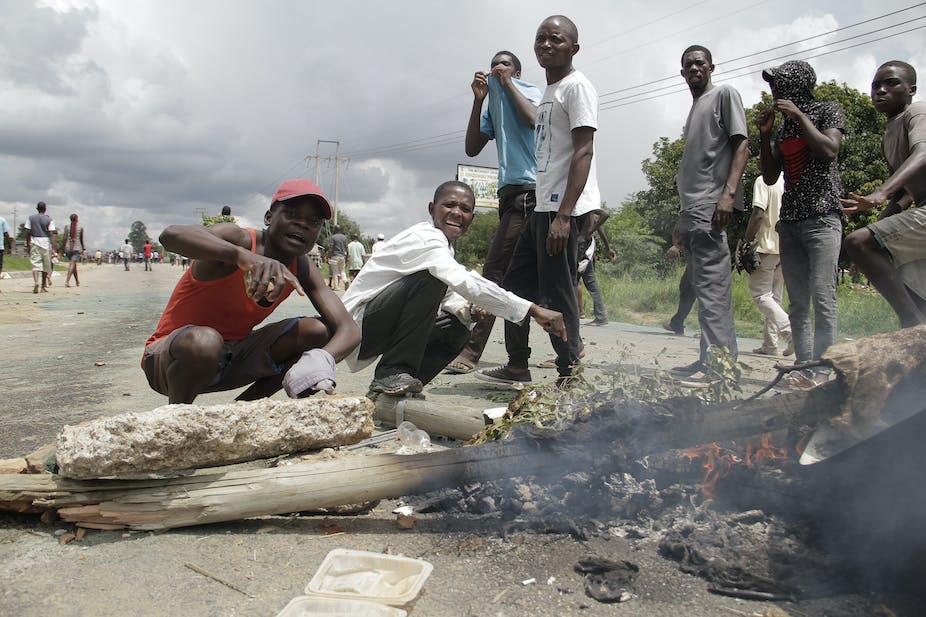 Zimbabwe erupted in violent protest after the government doubled the price of petrol. EPA-EFE/Aaron Ufumeli The cash crisis

The US dollar is the official currency of commerce. But because Zimbabwe’s economy has essentially ground to a halt, it has few means of bringing new dollars into the country. That, and the steady money laundering of real dollars by high-level officials of the ruling Zanu-PF party, has drained the country of currency.

The government has printed $1 bond notes — known as zollars – for Zimbabweans to use instead of real dollars. They are supposed to be exchangeable at par, but in 2019 they are worth as little as a third of a paper dollar. Many merchants refuse to accept zollars at all.

Bond notes now trade on the black market at 3.2 per dollar, according to the Harare-based ZimBollar Research Institute.

The stress has also spread to financial markets, with locals piling into equities to hedge against price increases.

Mnangagwa may be attempting to obtain loans from Russia and from shady Central Asian countries like Kazakhstan. But what the president should be doing is prosecuting and imprisoning his corrupt cronies. That could limit the flight of dollars from Zimbabwe.

He also needs to trim the bloated civil service of excessive patronage appointments. Most of all, if he dared, he should be cutting military expenditures. Zimbabwe has no imaginable need for its large and well equipped a security establishment.

Such bold measures could return confidence to the country’s corporate and agri-business sectors. If coupled with reduced military and other expenditures, and bolstered by funds no longer being transferred overseas, Zimbabwe’s long repressed economy could take off from a very low base.

Raising petrol prices in a land where but a few months ago supplies of petrol were short and motorists queued for hours and days outside stations is neither politically nor economically wise. The newly aroused protesters will not readily melt away. Putting such a hefty extra charge on an essential commodity, and doing so just when Zimbabwe’s parlous economy was beginning to show signs of stability, shows few leadership skills and little common sense.

Inflation has soared since the national election in July, almost reaching the Sudanese level of 70% a year. Foreign capital and domestically reinvested capital is avoiding the country.

On top of this, exporters are struggling under draconian Reserve Bank regulations. Only Chinese purchases of ferrochrome, other metals and tobacco, keep the economy ticking over, albeit in an increasingly dilatory manner.

A further drain on confidence and economic rational thinking is the Reserve Bank’s allocation of whatever hard currency there is to politically prominent backers of the president. That is how arbitrage during President Robert Mugabe’s benighted era helped to enrich his entourage while sinking the Zimbabwean economy and impoverishing its peoples.

Work that needs to be done

Mnangagwa’s regime has much more work to do to stimulate sustainable economic growth. He will need to restore the rule of law, badly eroded in Mugabe’s time, put some true meaning into his “back to honest business”promise, and widely open up the economy. That would mean eliminating most Reserve Bank restrictions on the free flow of currency and allowing the entire Zimbabwean economy once again to float.

Most of all, Mnangagwa needs to rush home from Russia and Asia and rescind or greatly reduce the price of petrol. After so many years of repression and hardship, Zimbabweans are out of patience.

What can be done about badly depleted ...